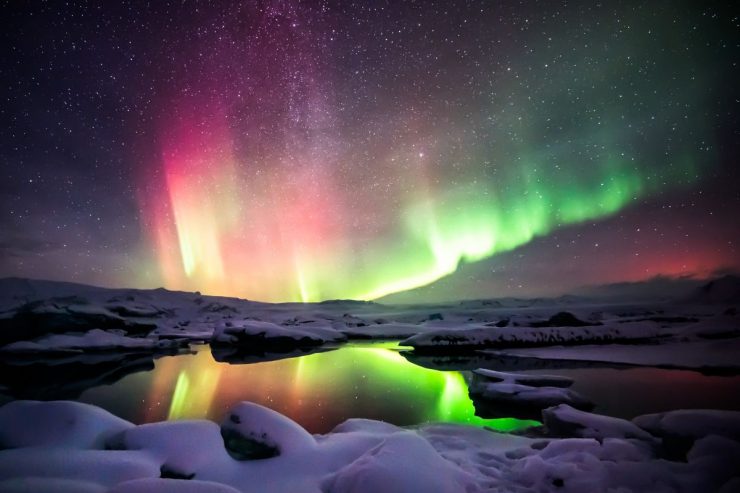 What does Iceland’s energy mix look like? Let’s find out! In our worldwide energy mix series, we look at how different countries use a number of energy sources in their energy mix to provide heating, electricity and transport.

Iceland is a bit of a success story when it comes to its energy mix. As little as 40 years ago, the island was a developing country, dependent on fossil fuels to meet its electricity, heating and transport needs.

Today, Iceland can boast that it is the only country that generates 100% of its electricity and 95% of its heating from renewable energy sources.

Luckily, it sits in a perfect position to benefit from some of Earth’s natural resources; geothermal and hydro energy. Let’s find out more!

There may be no need to worry about security of energy sources for Iceland, as according to geologists, there is a lot more potential for the island’s geothermal and hydro energy for years to come. Currently, the country has only used around 20-25% of their available hydropower, and only 20% of their available geothermal energy.

Transport, on the other hand, is still all down to oil, and Iceland’s oil reserves are not very big; they rely heavily on imports from other countries. Iceland is looking at other sources of energy. For example biofuel, electric cars and hydrogen cells to power cars and buses

Unfortunately, even though Iceland has so much natural resource, it’s currently too difficult to sell on the extra energy that they don’t use to other countries. Plans to build an extremely long cable (interconnector) to the UK keep being delayed so Iceland is looking at other options. There are proposals to use the excess energy to produce hydrogen from water in a process called electrolysis, this could be used to power transport in Iceland or exported if production is high enough.

The production of Methanol as a by product from geothermal plants has also begun recently. This process captures CO2 that would have been released and turns it into a fuel that can be used in cars where it emits 90% less CO2 compared to petrol or diesel.

Iceland is also focusing on attracting heavy industries that use a lot of power such as aluminium production and data centres. Iceland is ideally situated for this as they can be powered by renewable energy and there is no need to build and run expensive cooling systems which saves companies money and reduces their carbon footprint.

While sometimes being dangerous, Iceland’s placement actually benefits from natural and renewable geothermal energy, that can be accessed both deep underground, as well as much nearer the surface.

Both the hydro power and geothermal energy Iceland has to use are found all over the island, so there are no real issues with accessing either. These sources provide a clean, highly accessible and affordable source of energy for the whole population.

However, there are always costs involved with building hydro power and geothermal power stations for electricity as well as the infrastructure needed to use the heat from the earth straight into homes in order to heat spaces and water.

To get to the underground heat, there are a number of options, most of which involve drilling underground; the differences come from how far underground the drills go.

For tap water, both hot and cold, holes are drilled as low as 200m to as deep as 2000m, in order to release steam from the island’s natural heat pools. This steam then rises to turn turbines, which pumps up water which is then distributed to homes and businesses nearby.

This means that hot water is available whenever needed, rather than using energy to heat it on demand. For cold, clean drinking water, the water from underground is simply cleaned and cooled and again comes straight out of the tap.

Find out more about Geothermal Energy

There are two sides to the cleanliness of Iceland’s energy mix; on the one hand, renewable geothermal and hydro energy are covering all the electricity and heating needs of the island. Even swimming pools are heated by geothermal energy! However transport, including large fishing ships, which are extremely important to a remote island like Iceland, is still reliant on oil and petrol.

The population of Iceland is under 400,000 people, however because of all its cars, buses and ships the island has one of the highest levels of greenhouse gas emissions (which contribute to global warming) per person in Europe!

Iceland is trying to move away from using fossil fuels through changes to agriculture such as extensive use of greenhouses and hydroponics, and by building fish farms on land, all powered by renewables. This means they will have to import less food and so will reduce the island’s CO2 emissions even more. As well as through changes in industry by attracting new industries and by encouraging the development of carbon capture and storage technology.