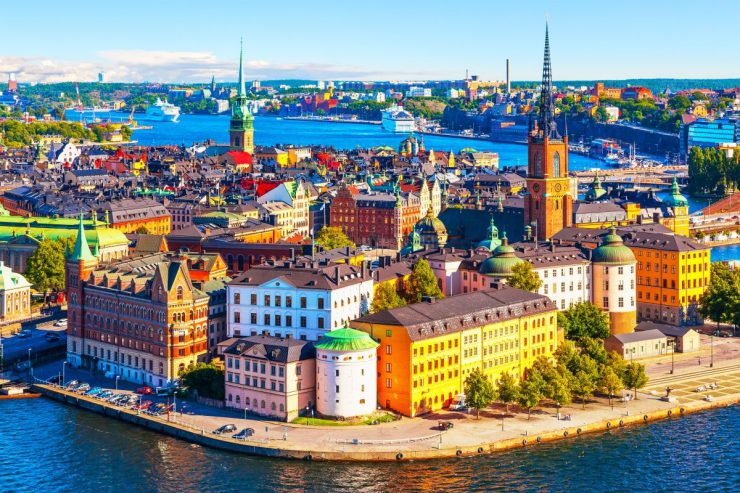 Sweden is the highest performing country when it comes to the energy trilemma, ranked first in 2021, 2nd place is Switzerland and third goes to Denmark.

Click here to see the full rankings of the energy trilemma.

There are a few reasons it does so well, including having an energy mix of mostly low carbon sources, which leads to low emissions and low air and water pollution levels.

Its location also helps Sweden score positively in both security and accessibility, but we’ll look into that further below.

Sweden is a country that makes the most of its position amongst the Nordic (Denmark, Finland, Iceland, Norway and Sweden) and Baltic (Estonia, Latvia and Lithuania) regions in Europe.

Not only do they share electricity with some of these countries, as well as having connections with nearby Poland and Germany, but they can also import natural gas from Denmark through pipelines.

All of these relationships ensure a good security of supply for Sweden when needed, as well as giving Sweden security in that they can help with demand in other areas in return.

Sweden does not currently produce any of its own natural gas or oil, instead importing these from the countries above.

Biomass is becoming a larger part of Sweden’s energy mix, which the area is well suited for, as over half the country is covered in forests.

It is increasingly used as an alternative fuel for transport, in the form of biogas, and heating over oil and natural gas. Natural gas is used as an ingredient in biogas so this will still need to be imported from other countries, but Sweden has the security of growing their own biomass.

However, Sweden has a relatively small population compared to the size of the country. This means that they need to work out the best ways of using all the natural resources they have, and transporting it around efficiently to everyone who needs it.

While the majority of electricity is produced in the north of the country, Sweden has a much larger population in the south, therefore this area uses more energy.

This led the country to split into four different energy sectors, all with different prices. Other Nordic countries have electricity price areas too. This means that if there is a shortage of electricity between the different areas, the area with the highest demand and highest price gets the electricity available.

Swedish consumers get a refund if there is a power outage of more than 12 hours too.

An interesting fact about Sweden is that they use more energy per person than anywhere else in Europe! However, thanks to their use of low carbon energy, their emissions are lower than many other European countries.

Their low emissions levels might help them meet their goal of being **carbon neutral by 2045. **

They are definitely on their way to potentially meeting that target; by 2014, over half of their final energy use coming from renewable sources, and that includes electricity, heating and cooling, and transport.

A large part of Sweden’s plans for carbon neutrality focus on not using fossil fuels for vehicles by 2030. Instead, they would look to use their biomass resources to produce biofuels like ethanol, biogas and biodiesel.

In order to make sure these alternative fuels can work for Sweden, there must be enough petrol stations around the country for people to ensure they can access them.

Sweden also ticks another sustainability box by giving out a ‘green electricity certificate’, along with Norway, to power suppliers as a measure of their renewable energy generation.

This means that electricity retailers have to buy a certain amount of renewable energy to sell onto consumers.